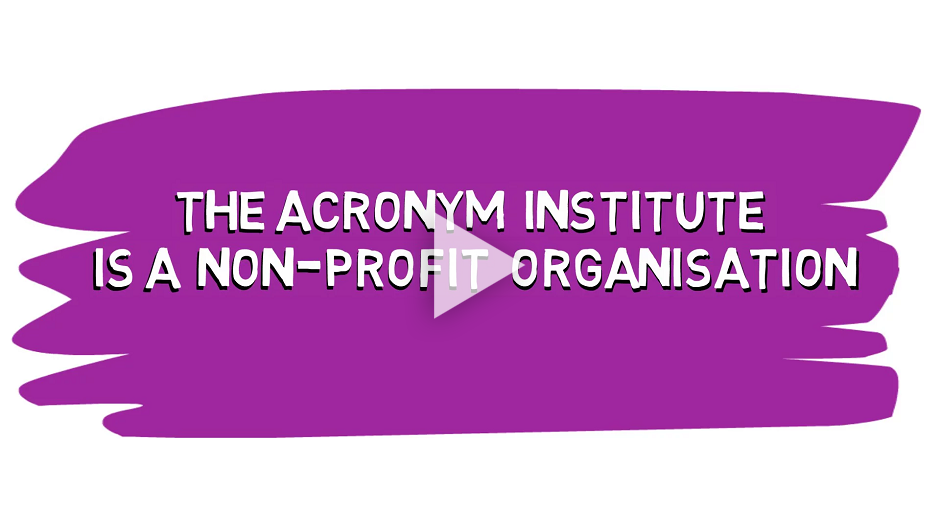 Welcome to this latest website, which was established in 2016 on behalf of the Acronym Institute for Disarmament Diplomacy.

We are a small non-profit organisation, founded in 1996 and based in the UK. Acronym is accredited with the United Nations through ECOSOC, and provides annual reports through the Department for Public Information (DPI).

Acronym’s work focuses primarily on humanitarian disarmament and diplomacy, international treaties and multilateral agreements, women, peace and sustainable security-building, and civil society activism. Our purpose is to draw attention to the interconnected human, environmental and security challenges that have become most urgent for humanity’s survival. Our hope is to provide people all over the world with information, ideas and tools to make our societies safer, fairer and better.

Though small, Acronym’s research, ideas and activism have served diplomats, governments and civil society campaigns as a capacity-builder, particularly through the development of strategies and networks. For example, Dr Rebecca Johnson established the nuclear ban strategy and Geneva office for the International Campaign to Abolish Nuclear WeaponsÂ (ICAN), becoming the founding president and co-chair of ICAN’s core group. Following institutional restructuring, Acronym was made a founding member of ICAN’s International Steering Group of ten organisations, where we continue to serve and coordinate the Campaign. ICAN was awarded the 2017 Nobel Peace Prize for mobilizing civil society and governments to bring about UN negotiations leading to the 2017 Treaty on the Prohibition of Nuclear Weapons (TPNW).

We hope our work and information encourage you to participate in campaigning for peace and planetary survival.

As you can see from our various publications â€“ from books to articles and pdfs of presentations given over the years to meetings and audiences around the world â€“ our issues have ranged from humanitarian and diplomatic efforts to end the testing, production and deployment of various kinds of deadly weapons, from guns and rifles to drones and nuclear weapons, while also encompassing new security thinking, militarism and arms trading, ways to end institutional, personal and political violence against women, and encouraging the growing role of women in ending patriarchal conflicts and promoting alternatives for sustainable peace-building.

For those that want to check out our 20 years of research and publications on the UN, Non-Proliferation Treaty (NPT), Comprehensive Test Ban Treaty (CTBT), Mine Ban Treaty, and other treaty developments and related political challenges, 91 issues of our journal Disarmament Diplomacy (1996-2009) are archived through our previous websitesÂ here.

Since ceasing to publish our own journal in 2009, Acronym’s director Dr Rebecca Johnson became a featured author for openDemocracy, where you can view her contemporaneous articles on the civil society and diplomatic developments that led to the 2017 Treaty, generally called the Nuclear Ban Treaty or “TPNW”, as well as a host of other issues relevant to British and international security and feminist approaches to end violence against women and girls.

Nuclear weapons have constant implications for our everyday lives in ways that we are often unaware of. In the UK and in other nuclear weapons dependent countries, we are constantly told that nuclear weapons keep us all safe. They are treated as a necessary – if undesirable – component of our national and international security. This is a false narrative.

Nuclear weapons do not keep us safe in an increasingly unstable world. Maintaining and renewing weapons that haveÂ indiscriminate and catastrophic consequences – humanitarian, economic, environmental – if they are used, either deliberately or by accident, is behaviour that does not recognise the realities of the world we live in now.

Today’s security threatsÂ like climate change, the refugee crisis, terrorism and the dangers of nuclear weapons are all linked. We don’t know what the rest of the 21st century is going to look like. The weather has become unpredictable and dangerous, global inequalities and insecurities have resulted in war and terrorism and as a result mass migrations are taking place across the world. We are not made safer by weapons that have the power to destroy us all. Why continue bringing the dangerous mistakes of the last century into this one?

The International Committee for the Red Cross has stated that there is no contingency plan in place or humanitarian organisation with the effective resources or training to respond to a nuclear detonation. There have been multiple near miss scenarios since 1945.

Nuclear weapons can be eliminated, there is growing international momentum towards a legally binding International Nuclear Weapons Ban Treaty. Treaties exist for chemical and biological weapons, landmines and against nuclear testing (CTBT). Why are nuclear weapons still legal? Acronym works for real human security, to enhance people’s safety here in Britain by promoting disarmament, and strengthening peace and security around the world.